I missed posting to Wacky Wednesday last week because D had an all day appointment with her doctor in Boston, so as we reunited this morning I knew we had to do something fun.

My oldest son is D’s age and they are great friends sharing common interests like a love of Minecraft and telling and hearing silly jokes. Another one of my son’s favorite things is words games and brainteasers. One thing he is always requesting is for me to make up “secret messages” for him. These are simply replacing the letters of the alphabet with a symbol that represents a letter which he has to figure out.

Here is an example of one I found online at The Classroom Game Nook. 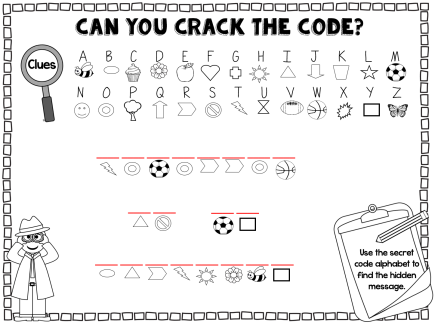 Knowing D and my son has such similar interests, I knew she would LOVE this activity! Instead of calling it “crack the code”, I decided to call it “braille hieroglyphics” which sounds a lot cooler. 🙂

I used APH’s feel and peel stickers to substitute out the letters of the alphabet. Below you can see D exploring the “hieroglyphic” symbols.

It took some getting used to. I had created 2 templates for her to explore and decide which one she thought she could work best with. I used this time to talk to her about how important it is for her to verbalize to her wonderful transcriptionist the layout that works best for her. I wanted to give her options so that she could understand that although the information delivered is the same, if she has a preference she can let us know and we can accommodate that. Self-advocacy is not a new concept for her, but knowing that she can have input in how her work is delivered to her is something that she is beginning to work on.

Here you can see the alternate format I presented is vertical rather than horizontal; 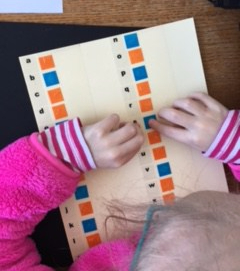 Originally, I had intended for D to decode and braille the message as she went. I quickly realized that there were WAY TO MANY moving parts and she was getting frustrated which was not the intent of the time we had together. I asked her if she had another suggestion on how we could get it done, and she asked me if she told me the letters if I could braille them out for her. I agreed : )

In hindsight, I had used a work tray over her brailler. D has a plexi glass shelf that goes over the top of her brailler so that she can be reading a brailled sheet on top of the tray, but still have access to braille on her brailler in the same space. I am not sure where to get one, as I have spent the last 2 minutes trying to track it down online, but I will take a picture and add to this post. Maybe someone will recognize it and let me know where it came from.

Below, you can see D working hard to decode her “hieroglyphic message”. 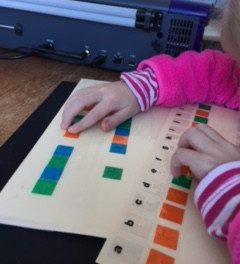 This is what she asked me to braille for her;

“hope you have a great day”

It might be hard to see, but I covered the page with the code on it in clear packing tape so that the stickers could be removed and reused. I also put the clear packing tape on the alphabet/symbol page so that the symbols could be switched around every time you do the activity. If your student is anything like D, then after the second coded message she/he will have memorized the symbols that are associated with each symbol and switching will be a necessity to keep the student interested 🙂

Photo credit: Hieroglyphic photo at top of this post