Math is not D’s most favorite subject. She actually cringes when I suggested that we work on math in any of our lessons. So the challenge was to sell her on a Wacky Wednesday activity which she always looks forward to and then drop the bomb that it was all about math…

I delivered the news by calling it a “math board game”. Still no shrieks of delight, but better reaction than I was expecting : )

I created a simple board game setup with a small stack of sticky notes, a piece of decorative cardboard, graphic art tape, tactile game dice, and nemeth number stickers. 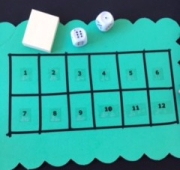 D was instructed that she needed to roll the dice and count the numbers on each die and then use the brailler to braille out the math problem in nemeth braille. Once she brailled the problem, she could take a sticky note and place it over the number she rolled. She needed to roll and braille every combination that showed up on the dice. 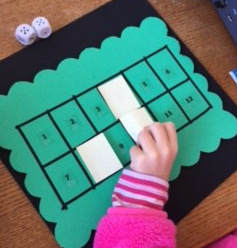 As the game board started to fill up, she began talking about how we could play it next time. These were some of her suggestions;

The game was a success, and we were able to sneak in a little math with the fun!